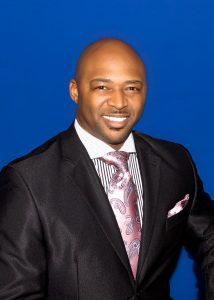 Roderick Weathersby was born, October 27, 1974 in Lumberton, Mississippi. His family moved to San Francisco, California, when he was 11 months old. He is the son of Rickey Lee Sr. and Lorraine Weathersby, and the second oldest of four children. At the age of seven (7) Roderick was born again as a result of accepting Jesus Christ as his Lord & Savior at the Mount Vernon Missionary Baptist Church.

In April of 1994, at the age of 19, God would further reveal His purpose in Roderick’s life when he acknowledged and accepted the call from God to preach the Gospel of Jesus Christ, where he was licensed and preached his first sermon at the Tabernacle of David Missionary Baptist Church in Vallejo, California, under the leadership of the nationally sought after Pastor/Teacher Rev. Robert L. McCray.

There his gifts as a young preacher and teacher would mature, as he taught Bible Study, Sunday School, and served as Youth Pastor. Throughout the years, Roderick has been blessed to teach and preach the word of God at various conferences, seminars and revivals across this nation. He is a dynamic and mesmerizing preacher who enjoys challenging God’s people to think outside the box. He would go on to be Ordained at the New Canaan Baptist Church in Atlanta, Georgia, in March of 2001 by Pastor Richard L. Porter.
In June of 1995, God blessed Rev. Weathersby’s life even the more when he was united in holy matrimony with LaShundra Weathersby. They are the proud parents of three sons: Adrian, Dalen and Gannon.

During his young adult years, Roderick quickly worked his way up through the ranks of corporate America, starting out supporting software in Silicon Valley, before ultimately being recruited to move to Atlanta, Georgia, where he currently leads a global Software Development team at a Fortune 500 Software Security firm, and serves as a senior software architect and ITSM Manager.

In March of 2010, God led Rev. Weathersby to the Mount Pleasant Baptist Church under the leadership of Rev. Clinton McFarland. There he would go on to oversee the Youth and Young Adult Department, Sunday School Department in Lithonia, Men’s class, and lead the Strategic Leadership Team during the process of Mount Pleasant becoming, “One Church Ministering in Two Communities”.

However, aside from all of the accomplishments and accolades, he remains content with simply being referred to as a child of God, and prides himself on being a product of what he calls, “The RG3 Experience”: Rooted in God’s Will, Relevant in God’s Word, & Real in God’s Worship.

His favorite scripture is 1 Corinthians 9:22:

Mount Pleasant Baptist Church We're a church on the move!